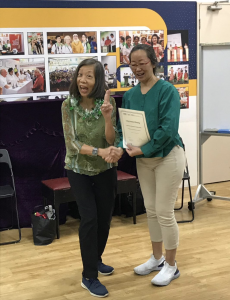 After graduating from university with a degree in Mathematics, I went into the IT field, starting off as a Programmer before moving on to the position of a System Analyst and then a Project Manager. I worked full-time for 18 years before I decided to semi-retire and become a freelance trainer for commercial companies. I used to be less of a people-oriented person and preferred to work behind the computer, but after conducting many courses over the years, my personality has since changed, and I now really enjoy interacting with others!

In 2013, I joined the StarHub Golden Guru contest, where I was eventually selected to be one of the final few ambassadors tasked with imparting IT knowledge to seniors. There I met Dora, a Cyberguide Trainer in RSVP, who later on introduced me to the opportunity of being a Mandarin trainer at the Silver IT fest.

I happily stepped up to take on the role and some time later, RSVP contacted me and invited me to join them as a member. I was initially hesitant about becoming a member as I wanted to stay as just a simple volunteer, but I was really interested in being a trainer under them so I accepted the offer.

In RSVP, I’m a Cyberguide Trainer and I help equip seniors with the IT skills necessary in this increasingly digitalised world. Some courses that I teach are “Cloud Storage and Sharing (Google Drive) – Introduction” and “Maximising the Usage of Samsung Smartphones”, with the latter being conducted in Mandarin. Coming from a Mandarin-educated background, I particularly enjoy teaching in the language as I find that I connect more with the participants and contribute better to their learning, especially since many app interfaces are in English and I can help to explain them in layman’s terms. 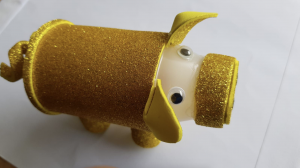 been both a commercial and volunteer trainer, I find that volunteering brings me much more fulfilment. The seniors at RSVP Singapore are easy-going and appreciative of my efforts, which fills me with a sense of satisfaction at the end of every session when I see them being able to understand and apply the new knowledge that they have learned. I still remember after a course, one of the RSVP participants actually crafted a piglet ornament for me, which was the first gift I ever received as a trainer!

Apart from Cyberguide, I am also active in RSVP’s Episodic Volunteering Programme and have participated in sessions such as “Cooking with Ex-Offenders at HCSA” and “Food Distribution at Yong En”. I like being a part of RSVP as they allow me to explore different volunteering opportunities according to my interests instead of fixing me to a specific role.

Outside of RSVP, I also enjoy taking on other IT ambassador roles to help even more people become tech-savvy. In 2019, I was appointed as a Silver IT Wellness Ambassador (SIWA) by the Infocomm Media Development Authority (IMDA) to help seniors embrace technology. I was also a Digital Ambassador working with the SG Digital Office to educate and encourage hawkers and seniors to go digital.

Over the years, I have come to realise that volunteer work has allowed me to grow as a person. When I teach, I must listen first instead of jumping to conclusions. This has made me more patient and a much better listener. On top of that, when I listen to the stories of others, I also learn from their experiences, which is an opportunity that I did not have when I was in the working world.

When I was busy with my career, I used to think that volunteering was just a waste of time. Now, having gone through it, I realise that there is so much to gain and that I have truly learned a lot from all my experiences.